One of the things I was going to do differently this year (15 in 2015 post here) is to worry less. A big challenge for a worry wart like me, but I can only try. As of now, there are 2 things that are on my mind which are also my biggest worries: (i) how B will adapt going to school next year and (ii) who will take care of B and how he will behave when I go into labour in July.

Prepping B for school
As some of you might already know, it has always been my concern how he will adapt to school because he's been home with me all this while and despite me bringing him out often, he clings onto me all the time when he's in a new environment or in the presence of strangers. I've been working to get him exposed to classroom environment and meeting new people. For one, we attend The Little Gym weekly at Forum and are onto our 4th consecutive week already. There is such a marked improvement in B's receptiveness to class and the environment and I could tell he enjoys it a lot. But the downside (or really the plus side depending on how you look at it) is, it's mainly just getting the kids to exert their energy and getting spent at the end of the class. Not so much of the discipline you need when you go to school. And it's kinda expensive consider each lesson is only 45 minutes.

Today, I took him to a trial class at Bibinog. Something I've been wanting to do for a long time  but didn't get down to it because of the class timings. I have to say B was much better behaved than I expected, he made it through the 1.5 hour class with almost no meltdown. I say almost because he kept telling me it's time to go ("let's go, let's go, all done"), and when the teachers asked him anything he just goes "no no" and "don't want". But other than that, he actually did pay attention to what was happening. Having a chat with the programme director after class who was also present during the lesson, she gave some very positive feedback on B's behaviour and I was encouraged. 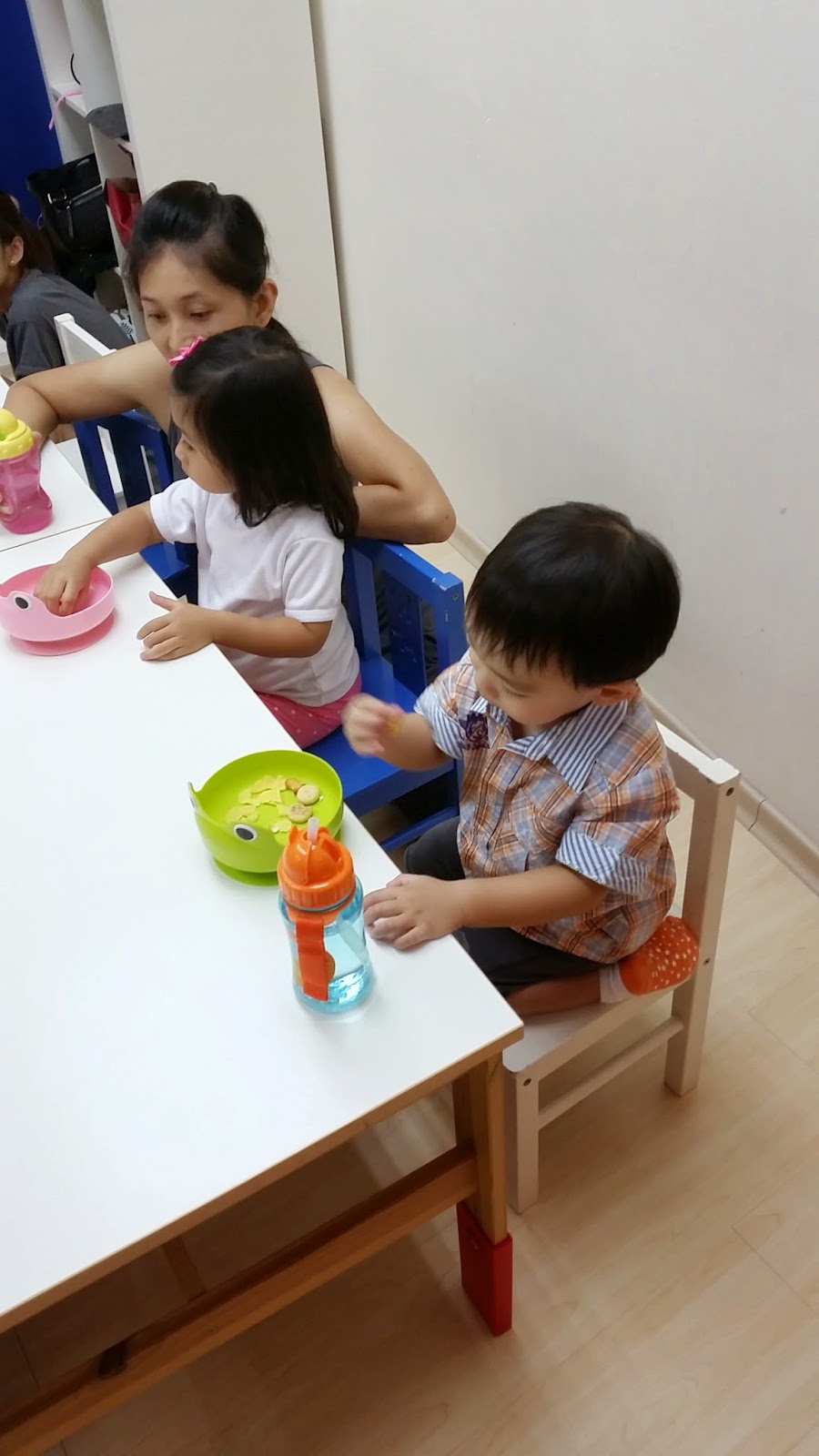 Tomorrow, we are going down to make payment and confirm registration for his pre-nursery class next year. We are enrolling him at a church kindergarten based off recommendation from a good friend A, whose kids had attended/will be attending and hopefully B will be classmates with her boy. It wasn't a very difficult decision to make as I thought it would, and I hope I made the right choice. For one, I did visit a few of the more "prestigious" schools and these were predominantly childcare as opposed to purely kindergarten. I would be lying if I said I did not want B to enrol in those schools, but I gotta be honest, the school fees are a killer with only a single income. Should I go back to work, then it is easily affordable but I see no point in me going back to work just so I can afford to send him to these schools and have him in the childcare for the entire day, which defeats the purpose of me being a SAHM in the very beginning. So a 3-hour kindergarten arrangement works best for us (although I don't deny 4-5 hours might be even better for mummy's sanity!).

I like the school's environment. We are not believers but the church brings a sense of peace and serenity every time I go there. The classrooms and its facilities are not fancy but it reminded me of my own kindergarten, some fond memories I had. A has been very helpful in making suggestions on how I could potentially make B's transition easier - by joining her when she sends her daughter to school, so B and her youngest son can have impromptu playdates at the school compound, letting him get used to the environment.

So prepping him, I am doing all I can at this point. I hope when the time comes, it is going to be a lot easier for him. Thankfully the school allows the parents to join them for 2 weeks, so hopefully that helps. I know there will be tears no doubt, but most children go through this phase right?
Posted by Lady in Waiting at 1:53 PM

This used to be the place where I lived and planned my life every two weeks, whining through my struggle and obsession during the 2ww (two weeks wait).
Then, it became a place for me to jot down the beautiful memories while preparing to welcome our little boy into our lives.
Now, a mother and a wife. Life is great.

POAS - Pee on a Stick